Starting 2016 with a quick anecdote and some advice regarding the eternal “What should I write?” question from screenwriters and television writers. 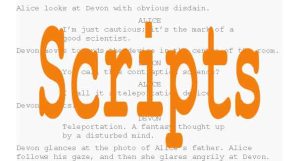 Firstly, write a genre you’re comfortable with. One that you enjoy watching yourself and have a lot of familiarity with. You cannot learn to be funny. You cannot learn how to write really exciting action if you’re not someone who has that interest visually.

Recently, I was judging for a contest that included both features and television pilots. For me, the best scripts I read were features and I felt the pilots, though some were good, needed more work structurally. I personally won’t send something out from a client until it’s in the best possible shape, and these weren’t but they were on their way. The response I got back from the administrator of the competition was that television was hot and that’s what the agencies were looking for. This statement is both true and false. Why? Read below.

Yes, there is a general consensus that television is cranking out some of the best material at the moment (Mad Men, The Walking Dead, Veep, Unbreakable Kimmy Schmidt, Narcos, etc…), however, this means there is a glut of television being written and fewer opportunities to make it when the bar is so high. As well, more and more filmmakers are in television so they get a lot of attention. Fair? Not necessarily but unless you’re going to create a web series you’ll have more opportunity to get your indie film made then a TV pilot. Therefore, what is lacking is good features. It’s harder and harder to find 10 GREAT movies every year.

So, the answer to what you should write? Ideally, both but start with where you’re comfortable and make sure you’re writing at least two or more scripts. No agent or manager will or should sign you off one piece of writing. You need to show you aren’t a one trick pony and they need to back up their selling of you with more great samples along the way.

it is important when being signed at an agency, especially the larger ones these days that you have material in both film and television. The company wants to be able to exploit you on every level. If television is really not something you can muster (and it is a medium that has to be done really well for it to get the attention you want), then think about another writing medium – books, graphic novels, and makes sure the reps see that you have a lot on your plate. You must be proactive; constantly writing and looking for ideas and NEW ways of telling old stories. 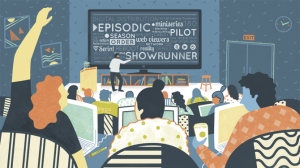 So, this is all to say, write where your strength is, but stretch yourself. Keep taking writing courses to learn how to write structures you’re not familiar with, read everything you can, watch and make notes and keep the imagination turning. Honestly, if I have to read another script where there is action and the next scene is the lead waking up in bed in a cold sweat from a dream, I’m going to scream. I know this is tried and true “haunted” but there is a more original way to show it. Find it and write it.

We all need to be wowed and I have been wowed in the last year but mostly by features, maybe one pilot. If you’re serious about writing than whether your paying job is as an insurance salesman, your real job is as a writer. As much knowledge and education that you have about how to sell insurance at your best should also be the time and effort you put into your writing. It’s a huge commitment but it will be recognized.